The application process was quick and straightforward . After applying to the university, we received our acceptance within about two weeks. Applying for the visa was time-consuming, but it took two hours to complete online. Unfortunately you then had to go to the American embassy in Berlin, which was a little trip for me. You had to leave your passport at the embassy and then got it sent to you with the imprinted visa certificate after about a week.

Now we started to draw up a learning agreement in which we compared courses that the university offered with our home university. You could also see the times when the courses were taking place and thus create an overview and your preferred timetable. Since we needed a total of 30 credit points in Germany, we had to take five subjects. A subject had 3 credits, which, when converted into German values, were 6 ECTS each. Since the CSUF’s normal study program only includes four courses, we had to pay the fifth extra.

When choosing the subjects , it was important to include more than the five courses on the learning agreement, as you do not necessarily get all of the courses at the CSUF. At the beginning there was an introductory seminar for the exchange students which also announced that each of us has already been enrolled in about two or three of our courses. The further course selection then takes place on site using so-called class crashing. Since I was only directly enrolled in two courses, I had to “crash” three more. This turned out to be extremely difficult because there were so many foreign students who were also looking for the right courses. It was also made more difficult for us that we had to take at least two technical and three business subjects, or the other way around. In the end, however, we managed to find the right courses and were, by and large, very satisfied with our selection .

As soon as we received the confirmation, we found out what the best accommodation option was . From field reports at your website revealed that the “University Village”, directly across from the university , has performed best. The good thing here was that the site had its own cafeteria, where you could choose two meals from breakfast, lunch and dinner per weekday . The apartments were small apartments with three residents each. The largest room had its own bathroom while the other two rooms shared one. We never had a problem using a bathroom for two. The kitchen was well equipped with a stove, sink, oven and a spacious refrigerator.

The University Village also had a pool with loungers and a lounge where you could watch sports and play billiards or table tennis. With a few exceptions, the residents were all students and came from many different countries. There were many Germans but also some Asians, as well as Mexicans and local students. The staff was also very friendly and helpful and you could borrow a vacuum cleaner or similar equipment at the reception instead of buying everything yourself. The only drawback: Unfortunately there were no plates, cutlery or anything else in the apartments. You had to get this yourself, which was quickly done with a short walk to the nearby target.

Because of the greater choice in the economic area, we chose our subjects in the end in such a way that we took three economic and two technical subjects. The subjects taken were :

The Human Resource Management course was very well structured and the professor was very experienced in his field . In addition to the two midterms and the final exam, a business conversation was simulated in groups, which dealt with whether our company should take over a certain other company from an HRM point of view. The whole principle was presented very realistically by Professor Bender, since he tried to steer the discussion in the way it would be discussed in a real company. Unfortunately, after this semester, Mr. Bender is no longer a teacher at the CSUF because he is moving to another country. Check anycountyprivateschools to see more reviews from current students.

About the Team Leadership course, it can be said that it was sometimes difficult for me to keep up with the vocabulary. This was mainly due to the fact that the entire course had a fairly strong psychological component and thus a lot of vocabulary unknown to me was brought into play. However, the professor was very helpful and friendly. What I personally didn’t like that much was the very common system of multiple-choice exams in the USA, which was used exclusively in this subject in addition to a presentation in all three exams. Fortunately, we were mostly spared this in the other courses.

In addition to the Human Resource Management course, my favorite course this semester was the Global Risk Management and International Finance course . Professor Greco had offered this subject for the first time this semester and for this reason it was not fully developed in some places, but I liked the subject very much. Since the course had a lot to do with internationality, the exchange rate risk was a major topic in this course in addition to the normal risk factors. The highlights were the guest speakers. A former student of Professor Greco, who now works for Disney and was responsible for risk management for the construction of a new Disneyland in Shanghai, gave a talk on the risks involved in such a mega-project. There was also a guest speaker from Lloyds’s insurance industry. The grade resulted from three presentations, with the last and largest one taking a closer look at a company and evaluating and evaluating its risk management based on a specific project on which the company is currently working or has been working.

The digital computation course was about programming with Matlab. The weekly homework helped a lot to stay on the ball and also made up a part of the final grade. In general, I’ve learned a lot in this subject and Professor Banks is a very helpful and nice professor whom I would recommend to anyone.

The Economics and Professionalism for Engineers course was pretty tough. On the one hand, the matter consisted a lot of accounting issues and investment calculation. On the other hand, we dealt with cases in which something went wrong on the technical side and how an engineer then behaves professionally and ethically. Although the professor was nice, he didn’t understand as well as the others how to explain things properly. As a result, you often had to spend a lot of time doing homework in order to understand everything correctly and to get the right result. Otherwise, the division of the lectures was sometimes not completely clear, which is why this course was probably the most difficult of this semester.

Studying at the CSUF was very pleasant, and not just because of the weather . The professors were mostly very helpful and I personally learned a lot in my courses for my future .
The examinations usually consisted of two midterms each, which asked about the material that had been worked on up to that point, and a mostly cumulative final exam. The midterms were of varying difficulty, it always depended on the subject, but in no case so difficult that you couldn’t make it. Since homework had to be done throughout most of the subjects, which were then also assessed, the learning workload before the exams was never that large, because you continuously did something for the course and the material was therefore easier to get stuck with. So it is completely different to Germany, where often only a single examination is decisive for the entire grade. In addition to the exams, presentations were also on the agenda in many of the courses. These were mostly quite easy and shorter than you are used to in Germany.

The lectures were a little shorter than I am used to in Germany, although I had one less subject in America than I would have been in Germany. On the other hand, the workload at home in terms of homework, case studies and learning for weekly quizzes was much higher, so that it was basically balanced.

There was often a lot of homework during the week so that we could have the weekends off. Nevertheless, there was often still time to go to the beach or do something with other students. On the weekends we were out and about a lot . We rented a jeep for the entire time from a local mechanic, with whom we did a few trips over the weekends. One advantage of this was that we had Friday off. (Which many had because most of the lectures seemed to fall on Monday through Thursday) From San Diego to San Francisco we drove the west coast and also to Utah, Arizona and New Mexico to see all the national parks around the Grand Canyon, Angels Landing and the like. Of course, Las Vegas could not be missing either. We were able to use the sometimes long journeys very well for homework, as a six-hour drive was almost normal. At the end of the semester we drove the equivalent of about 16,000 km in our jeep and I can only recommend everyone to do the same and get a car, otherwise you will be pretty lost in the vast America. Mainly because the bus and train connections in Los Angeles and the surrounding area are poor or even non-existent. (And gasoline is very cheap)

In conclusion, I can say that I don’t regret it a bit that I took on the very high costs of a semester abroad in the USA . I had a very good time at California State University Fullerton and I think this is an experience that will help me a lot in my life.

In addition to the many trips and new friends, I will particularly positively remember the entire atmosphere at the CSUF and the competent and helpful professors, especially in risk management and human resource management. 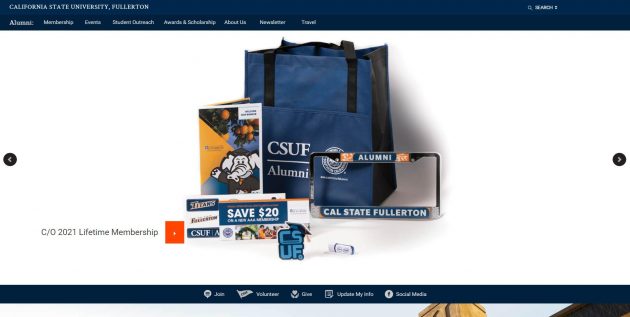